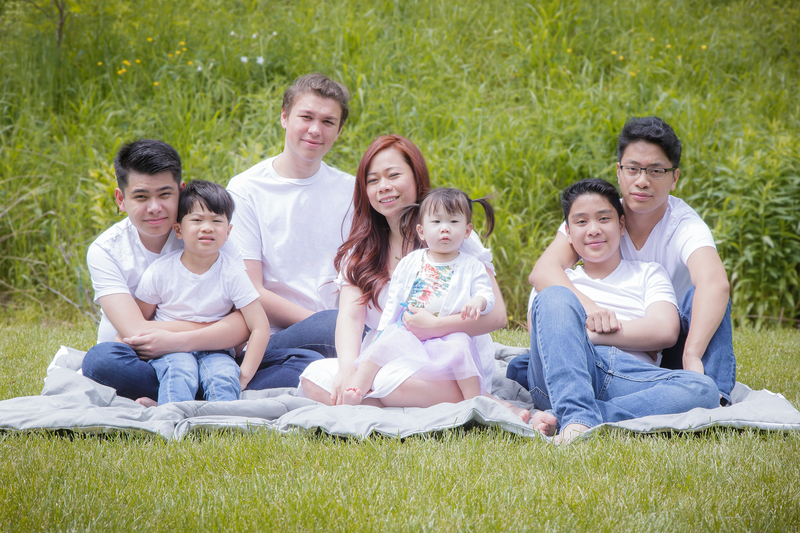 With 4 boys at home, we were excited to learn that baby number 5 would be a girl!

At 20 weeks things were finally getting better. The morning sickness was under control and my energy had returned. I was headed to my OB appointment, 4 days after my ultrasound, when I got a call in the car. I was told to head to Sunnybrook Hospital as they were able to squeeze me in for an emergency appointment. They said there was an abnormality in the shape of my baby’s head. I was scared. I bawled in the car, and somehow navigated my way to the hospital. I wanted to call my husband, but he was at work and I didn’t want to disturb him. So, I told myself to be strong and I prayed for her.

After 2 more ultrasounds to confirm, the doctor broke the news that my baby girl had spina bifida. I had no clue what that was, except that it must have something to do with the spine. He explained that her spine had not closed properly, it was sticking out of her back and she would need surgery shortly after birth to repair it. The words “paralysis”, “brain damage” and “clubbed feet” hit me hard. He referred me to a Pediatrician and a Pediatric Neurosurgeon to answer my questions. He assured me that I had done nothing wrong and that this was not my fault.

I was told if I decided to terminate my pregnancy it would have to be done within the next few weeks. I felt her moving and kicking inside of me. How could I even consider that?

The doctor gave me some space to absorb the news and call my husband. I worked up the courage to call my husband. He came as soon as he could. We drove home together in silence, both in shock. Telling my parents was one of the hardest things I’ve ever done. We were devastated. I buried myself under the covers and cried. I prayed, harder than I’ve ever prayed in my life. I said, dear God, I have a difficult decision to make. I considered the impact on my other kids. How can I make a decision that will affect their future so much when they’re still so young? If we decide to terminate the pregnancy, everything remains the same…except I lose my daughter? She’s still kicking me. She’s a part of me. How can I do that to her?

I turned to the internet to learn as much as I could. I looked for her best chance. I learned about fetal surgery. While it was NOT a cure, it had the proven potential to minimize the effects of spina bifida. The catch was that it was only available at in the States. I decided that I needed to do this for her, even though I’d be away from my family from the surgery until I gave birth. We would give her the best chance she had at a normal life.

I met with Drs. Drake, Ryan and Van Meighem at Mount Sinai Hospital and underwent many tests to see if I was a candidate for the surgery. To my surprise, Dr. Ryan told me they were ready to do the first spina bifida fetal surgery in Canada at Mount Sinai, in collaboration with SickKids and Vanderbilt and they asked me if I would like to be their first patient. My jaw literally dropped on the floor. I said “ABSOLUTELY!!” I was so happy! I tried really hard to restrain myself from hugging him.

While waiting for surgery I reached out to a few Canadian spina bifida moms I found online. I had more questions for the families living with spina bifida than for the doctors. They were unbelievably kind and understanding and answered my questions the best they could. I was connected to a group of women who had undergone fetal surgery on Facebook. They were all so kind, and they shared their blogs, advice, photos, stories and videos of their kids doing so well! I saw the real struggles and joys of parenting a child with spina bifida. I saw birth announcements, and news that babies had passed. I saw posts about hospital stays, surgeries, and photos of first steps, dance recitals, sports games, prom and graduation. I was inspired and thankful!

After several tests, our surgery day arrived! The magical team of 24 medical staff from all 3 hospitals were there. I was not scared, but so incredibly grateful for all the wonderful people in that room I spent 2 weeks in recovery at Mount Sinai, followed by bedrest at home, until the day I finally got to meet my beautiful baby girl! I remember being so scared, but as she passed each test I was able to let go of a small piece of that fear. She progressed well in the NICU and soon she was home. She has not needed further brain surgery. She is now a vibrant little girl that can stand and walk with support and continues to progress every day. She is a smooth talker and a great dancer. She is a happy and cheerful child, determined to meet all her milestones.